“I’m committed to making sure the forces of peace and justice prevail,” Missouri Governor Jay Nixon said in Ferguson on Saturday, August 16, after a week of conflicts sparked by the police murder of teenager Michael Brown. “If we’re going to achieve justice, we first must have and maintain peace.”

As everyone knows, if it weren’t for the riots in Ferguson, most people would never have heard about the murder of Michael Brown. White police officers kill hundreds of black men every year without most of us hearing anything about it. That silence—the absence of protest and disruption—is the peace which Governor Nixon wants us to believe will produce justice.

This is the same narrative we always hear from the authorities. First, we must submit to their control; then they will address our concerns. All the problems we face, they insist, are caused by our refusal to cooperate. This argument sounds most persuasive when it is dressed up in the rhetoric of democracy: those are “our” laws we should shut up and obey—“our” cops who are shooting and gassing us—“our” politicians and leaders begging us to return to business as usual. But to return to business as usual is to step daintily over the bodies of countless Michael Browns, consigning them to the cemetery and oblivion.

Governor Nixon’s peace is what happens after people have been forcefully pacified. His justice is whatever it takes to hoodwink us into accepting peace on those terms—petitions that go directly into the recycle bin, lawsuits that never produce more than a slap on the wrist for the killers in uniform, campaigns that may advance the career of an activist or politician but will never put an end to the killing of unarmed black men. 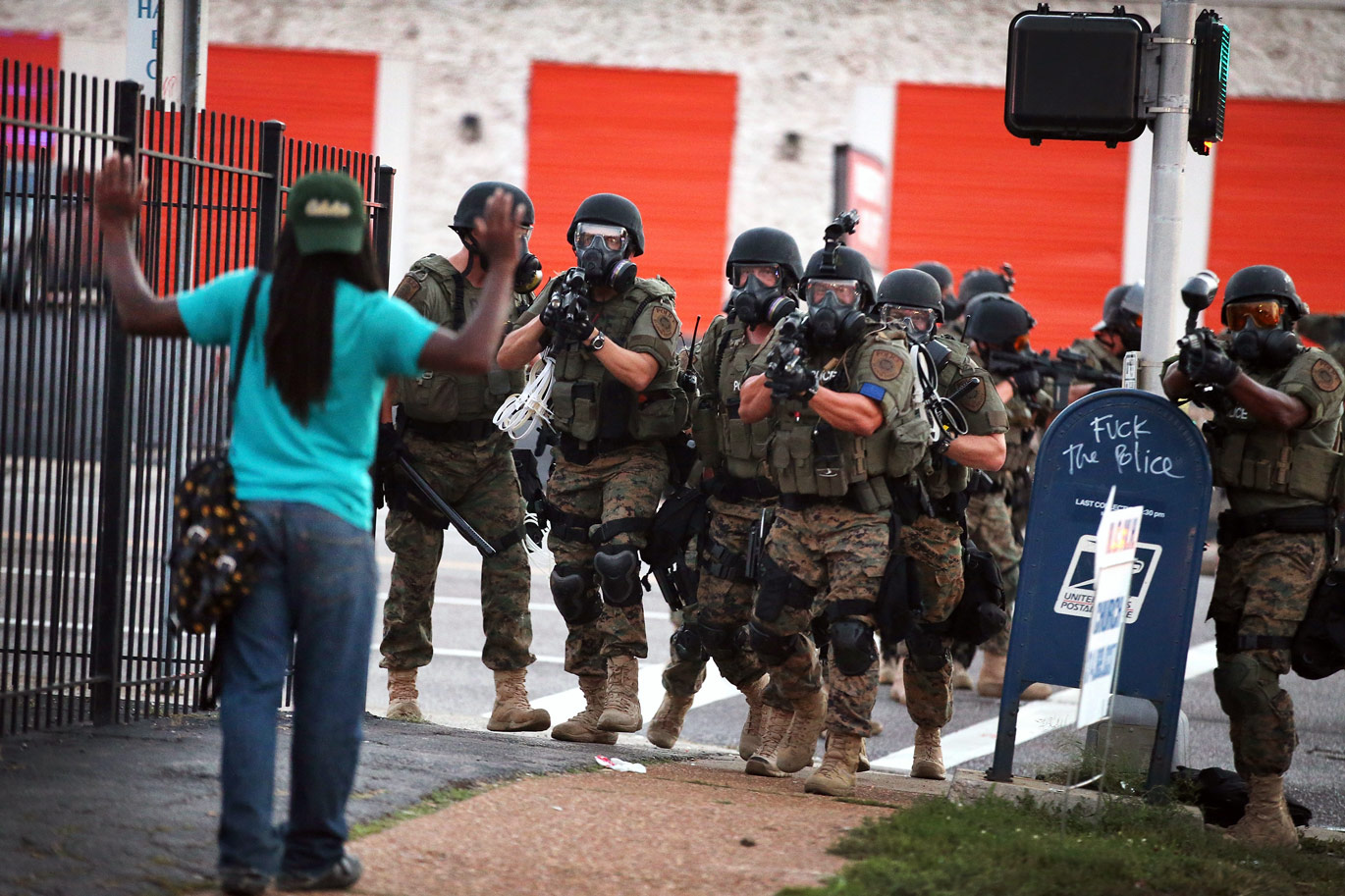 Keeping the peace in Ferguson

Permit us to propose another idea about how to address conflicts—what we might call the anarchist approach. The basic idea is straightforward enough. Real peace cannot be imposed; it can only emerge as a consequence of the resolution of conflict. Hence the classic chant: no justice, no peace.

Left to itself, a state of imbalance tends to return to equilibrium. To maintain imbalances, you have to introduce force into the situation. The greater the disparities, the more force it takes to preserve them. This is as true in society as it is in physics.

That means you can’t have rich people and poor people without police to impose that unequal relation to resources. You can’t have whiteness, which inflects and stabilizes that class divide, without a vast infrastructure of racist courts and prisons. You can’t keep two and a half million people—nearly a million of them black men—behind bars without the constant exertion of potentially lethal violence. You can’t enforce the laws that protect the wealth of good liberals like Governor Nixon without officers like Darren Wilson killing black men by the hundred.

The militarization of the police is not an aberration—it is the necessary condition of a society based on hierarchy and domination. It is not just the police that have been militarized, but our entire way of life. Anyone who does not see this is not living on the business end of the guns. These are the forces of peace and justice, the mechanisms that “keep the peace” in a dramatically imbalanced social order.

Sometimes they appear as surveillance cameras, security guards, police stopping and searching or shooting us. Other times, when that becomes too controversial, the forces of peace and justice reappear as the good cops who really seem to care about us, the earnest politicians who want to make everything better—whatever it takes to get public opinion back on the side of the ones who shoot the tear gas. Still other times, the forces of peace and justice are community leaders begging us to leave the streets, accusing us of being “outside agitators,” or promising some more effective outlet for our rage if only we will cooperate—anything to thwart, discredit, or defer immediate concrete struggle against injustice. In every case, it’s the same swindle: peace now, justice later.

But real peace is impossible until we put an end to the violent imposition of inequalities. All the conflicts that are currently suppressed by the forces of order—between developers and residents, between rich and poor, between the racially privileged and everyone else—must be permitted to rise to the surface. Make it impossible for anyone to coerce anyone else into accepting a relationship that is not in her best interest: then, and only then, there will be an incentive for everyone to address conflicts and reach accord.

This is the only way forward, but it’s a daunting prospect. It is not surprising that people often blame those who stand up for themselves rather than coming to terms with how deep the divisions in our society run. This explains why so many apparently well-meaning pundits have pretended not to understand why people would engage in looting as a form of protest against the murder of Michael Brown. The same constant imposition of force that took Michael Brown’s life separates millions like him from the resources they need on a daily basis. In this light, looting makes perfect sense—as a way of solving the immediate problems of poverty, of rebelling against the violence of the authorities, and of emphasizing that change has to be more thoroughgoing than mere police reform.

Let us not resent those who get out of hand for reminding us of the conflicts that remain unresolved in our society. On the contrary, we should be grateful. They are not disturbing the peace; they are simply bringing to light that there never was any peace, there never was any justice in the first place. At tremendous risk to themselves, they are giving us a gift: a chance to recognize the suffering around us and to rediscover our capacity to identify and sympathize with those who experience it.

For we can only experience tragedies such as the death of Michael Brown for what they are when we see other people responding to them as tragedies. Otherwise, unless the events touch us directly, we remain numb. If you want people to register an injustice, you have to react to it immediately, the way people did in Ferguson. You must not wait for some better moment, not plead with the authorities, not formulate a sound bite for some imagined audience representing public opinion. You must immediately proceed to action, showing that the situation is serious enough to warrant it.

Ferguson is not unique—there are countless such towns across the United States, in which the same dynamics play out between police and people. The rebellion in Ferguson will surely not be the last of its kind. Those of us who don’t buy into Governor Nixon’s program of peace now, justice later must prepare ourselves for the struggles that are soon to unfold. May we meet one day in a world without tear gas, in which skin color is not a weapon.

The conflict in Ferguson over the murder of Michael Brown is only the most recent of many such uprisings around the US. This is an incomplete review of firsthand accounts and analyses of the previous precedents for struggles against policing.

CrimethInc. is an anonymous network of anarchists and insurgents, a desperate measure against quantification and computation, a flaming hearse for the hierarchies of our age.